Speck, the Prosciutto from Tyrol

Have you ever tasted “speck”, the smoked ham which is a typical delicacy from the South Tyrol region in the north-east of Italy, near the border with Austria?

Traditionally its’ production began back in the XIII century in order to meet the need for preserving the meat for as long as possible. Today speck is one of the most important products in the local gastronomy and is safeguarded at a European level by a protected geographical indication (PGI). Etymologically, the term comes from the German “speck”, which means “bacon fat”.

The recipe for this ham, which was jealously guarded and passed down from generation to generation, was born from the union of two methods for preserving meat: ripening, which was used, among other things, for raw ham in the Mediterranean region, and smoking, a typical method from Northern Europe. As South Tyrol (Alto-Adige in Italian) is a region at the crossroads of two different cultures and benefits from a unique climate, the two methods were merged, whereby through following the guidelines of “a little salt, a little smoke and plenty of fresh air”, consisting of moderate salting while alternating smoke and fresh mountain air, speck was produced as a result. In order to make speck, one uses lean pork legs which, unlike the preparation of prosciutto, are opened and boned. The pork is then covered with a mixture of salt and seasonings (pepper, rosemary, bay leaf, juniper berries, cumin, etc.) and are left to marinate in cold rooms for up to three weeks. The finished product must not contain more than 5% salt. The pork is then subjected to periods of light cold smoking (the temperature should not exceed 20°C) alternated with periods of drying in the fresh air. After smoking, the ham must dry and cure for about 22 weeks. In the past, they were stored in cool, slightly damp cellars. Today, they are cured in well ventilated rooms. Meanwhile, the ham loses about one-third of its’ original weight and becomes covered with an edible layer of natural mold, which prevents the meat from drying excessively and enhances the aroma. Once it is completely dry, the pork is then washed. At the very end, the pork is marked with the seal of the PGI. Speck is consumed most often just as it is, accompanied by cheeses and pickles, with wholegrain bread and a glass of wine. This is the best way to appreciate its’ mild, balanced flavor while leaving a slightly nutty aftertaste. Speck is also used as an ingredient in many recipes. Here is a great pasta and speck recipe that we invite you to try. Outside of Italy, speck can be purchased at an Italian grocery or specialty store.

Penne with Leeks and “Speck” 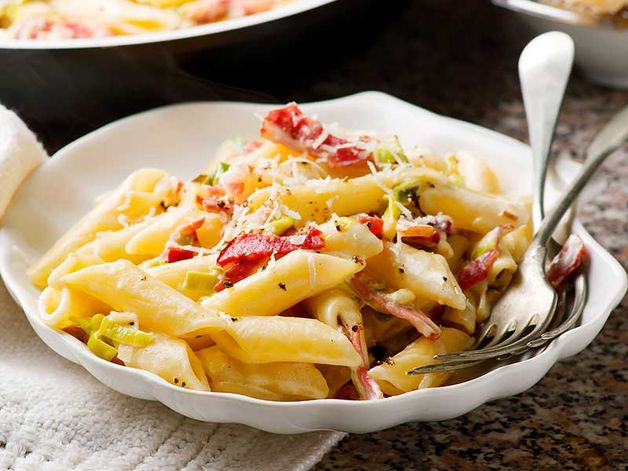 Penne with Leeks and “Speck”